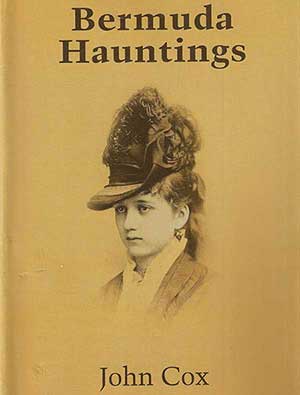 Author and historian John Cox has always had a fascination with the supernatural, so it comes as no surprise to learn that a ghostly thread runs through the books he has written (but please don’t call him a ghost writer!).

Not only do ghosts appear in his family home, even causing him to move out of his original bedroom because they were so disturbing, but his family history is deeply interwoven with folklore and tales of the supernatural. Indeed, through decades of researching his ancestry and the books he has published, Mr. Cox’s name has become synonymous with the phenomenon in Bermuda – so much so, in fact, that he will be featured in a Discovery Channel production in the new year.

In committing such stories to print, the author’s goal is to leave an historic legacy for future generations to study and enjoy. Yet, despite its title, Mr. Cox says his newest book, ‘Bermuda Hauntings’, is not about ghosts as such.

“It’s about various things. The whole middle section is what I call ghost stories – those which have come down through the generations as part of Bermuda folklore as opposed to ghost stories arising out of interviews with people who have had experienced present day sightings.”

With Charles Dickens “A Christmas Carol” in mind, Mr. Cox feels his new book also lends itself to the festive season.

The book’s first chapter is entitled ‘When Birds Come Back’, and tells the deeply touching story of Anna Albouy, a 19th century spinster whose home, ‘Palmetto Vale’, was situated at the foot of Knapton Hill.

“The family were ship builders who built sloops and schooners on the shore, but the house is no longer there, and the family died out, so Anna’s story has gone into the history books” Mr. Cox relates. “The reason I wanted to discuss her life is that, like so many women of her time, she gave up marrying the man she loved in order to take care of her elderly parents – something that happened over and over. After her parents died, Anna gathered the courage to try and find the man, Ethan Hollister from Nova Scotia, and marry him. There is a ghostly twist to the story, which I have used in the middle part of the book. That story manifests itself over and over, where people see something at the latter’s death- a manifestation which is called a wraith.”

The book concludes with a ghostly tale of a shipwreck which accurred off Castle Island during the great hurricane of October, 1780.

“The ship was a British square-rigger, and maybe the crew didn’t understand hurricanes,” Mr. Cox ventures. It managed to get into Castle Harbour during the first half of the storm, and dropped anchor in the lee of the island . There was an ominous calm as the eye passed over. When the wind shifted around to the northwest two men were sent up the mainmast to cut the sails away. Then the wind shifted around northwest and it was ferocious that they become entangled in the unfurled topsail and were thrown into the sea, from which they were rescued with the assistance of soldiers stationed at the Castle Island garrison.

“Meanwhile, the ship and remaining crew were swept out through Castle Roads and were never seen or heard from again. It was like a ghost ship, yet two men lived to tell the tale. There names were Richard Algate and David Foggo, who subsequently married local girls and settled here.

As always with the author’s work, he tells the stories in a reader-friendly way. No excessive hyperbole, convoluted passages, or information overload. Instead, there is an elegant simplicity to his writing; easily assimilable yet thoroughly engaging and revelatory.

‘Bermuda Hauntings’ is Mr. Cox’s twelfth book, but with many fascinating and yet untold, true stories of supernatural significance still up his sleeve, it is a safe bet that more books will follow.